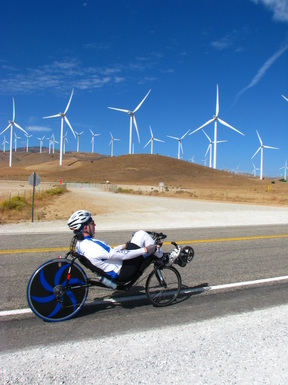 WHO THE HECK IS BILL SPAETH???? (-: Bill is a long-time recumbent rider who's grown some serious racer wings over the past couple of years. He's been a member of Team Raven Lunatics since the very beginning, participating in a slew of team relay events. In 2012, he was the first solo recumbent across the line at the prestigious Furnace Creek 508, racing under the totem "Pirate Fish". He was second only to the inimitable Phil Plath at the Oregon HPV Speed Trials. (Second male, that is... )
Besides being a recumbent racer, Bill is an accomplished runner and triathlete. Chances are you don't know that many people who are 3 time Alcatraz finishers AND Boston finishers. That's BIll.
He also coaches new runners to race half marathon and longer races for the Leukemia and Lymphoma Society Team in Training, and he leads the best 6AM M-W-F spin class on the West Coast (I'm a biased reporter, but it's true!!!)
Early on, Bill competed at water polo and lumberjacking. He's a beast.
I could go on and on saying nice things about Bill, but I remember back to when he was easily embarrassed, so I'll just close by saying that he's one of the many hidden treasures of the Lost Coast. 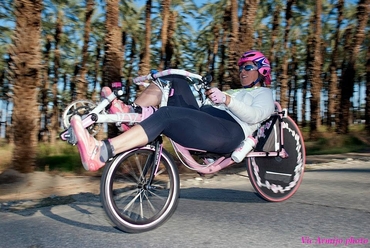 Hi. I’m Sandy Earl. I’ve been racing bikes for a LONG time, and recumbent bikes for quite a while, too. I’ve raced everything from velodrome races to RAAM. I’ve set 12 and 24 hour course records in 7 different states at various times. (The first reader who can correctly NAME those seven states gets some free team swag – just email us!).  And I’m still the only person to officially finish the notoriously-wicked Race Across Oregon in the “solo recupright” class, using both my upright and recumbent bikes. (Please – SOMEONE – go out and do this! My “record” is 47:43 – this has got to be the softest target in all of ultracycling…)
I’m also known for being a pretty good crew chief. I’ve got a perfect record at chiefing both RAO and the 508 – 10 solo and 3 team finishes between them – as well as a team RAAM and a solo RAW.
In real life, I’m a health educator. I bike commute most days. Commuting extends my training and reinforces the message that we can make healthy, active choices part of our everyday lives.
I feel insanely lucky to live in an area with clean air and water and ample space to run and ride and play.
Powered by